It is unclear why Chet did not head up any major air meets after 1934. Perhaps he was in yet another dispute with the N.A.A.; Chet wasn’t much on letting the N.A.A. (or anyone else) tell him what to do. Or perhaps his other business interests–including his growing involvement at Vulcan Iron Works–were taking him away from the time-consuming task of organising yet another Langley Day.

One possibility was that he wanted to shift the focus of his aviation activities toward a more recreational bent. The year after his last Langley Day, he put that into action in a big way. On 6-9 March 1935, a group of sportsman pilots met at the Mayflower Hotel in Washington. At the end of that meeting, the Sportman Pilots Association was organised and subsequently incorporated. Chet was its founding President (later Secretary too.)

The central activity of the S.P.A. was its cruises. A suitable vacation spot was chosen and the S.P.A. members flew in for one or more weeks of vacation together. In that way the spouses could come along and everyone could have a good time flying, golfing, boating, etc.

Chet made many of these cruises. Probably his favourite was the July 1939 cruise to St. Jovite, Quebec, north-west of Montreal.

Flying has become safe. The chair lift at St. Jovite is another matter altogether. 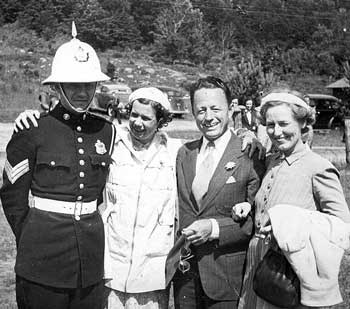 The Mounties always get their man. With the S.P.A., things might go another way…

In February of that year the SPA cruised to Nassau, the Bahamas.  Below are some of Chet’s home movies of that event.

Long before it has become the tourist mecca that it is today, the Bahamas was a favourite playground for Chet and his famlily, and this continued for many years afterward. Click here for some more video showing the beauty of the place thirty years after this cruise. The Bahamas and South Florida were also much of the inspiration for The Island Chronicles.

The S.P.A. represents a maturing of the aviation industry. Past many of its early unreliabilities, and now distinct from competition aviation, general flying had become a safe and comfortable means of transportation and recreation, and the S.P.A. was an expression of that maturity. This process would be accelerated–and altered–during World War II. Many S.P.A. members served in that conflict. When they returned, they found that aviation–and indeed the whole complexion of U.S. society–had changed dramatically.