In the course of his travels, Chet managed to capture many of the interesting aircraft of the 1930’s on film. We share some of these photos along with others in his collection.

In 1931 Charles Lindbergh trained his wife Anne to be a fellow pilot for one of his longest air voyages: his “Voyage to the Orient.” On 27 July 1931 they departed Long Island and travelled through Ottawa and up through the north of Canada, crossing the Bering Sea on 14 August and arriving in Tokyo on 26 August. They voyaged on to China and returned to the U.S.

These photos were taken 7 August 1931 during Lindbergh’s stopover in Aklavik, in the Mackenzie Delta region of the Northwest Territories. The Sirius is in the foreground of both photos; Lindbergh himself is seen alighting from the aircraft on the right.

In her 1935 account North to the Orient, Anne Lindbergh describes the landing at Aklavik two days earlier:

There, spread out for miles ahead, like so much tangled silver thread, were the meandering channels and watercourses worn by the Mackenzie River on the last slow lap of its journey to the Beaufort Sea.  So many and so tortuous were the streams which made up this mammoth delta that I wondered how we would ever find the right bend in the right river, and Aklavik.  Each circling stream had about the same course, the same number of tributary streams, some desultory and half choked with mud, others completely stopped at one end, making half-moon lakes–silver sickles of water.

As we came down lower and skimmed over the surface of one stream, we could not see across to another, for the banks were pine-covered.  A strange sight in this treeless land, as though the great army of firs which had started out to accompany the Mackenzie River only a short distance had decided not to abandon her completely until she had safety reached the end of her journey, and had marched by her side even into this barren land, a thin phalanx of green.

It was three o’clock in the morning when we finally found the settlement–a big settlement for the North, about twenty or thirty houses, two churches, radio masts, and even another plane pulled up on the bank.  At this hour it was so light that people ran out of their bungalows with cameras to take pictures.

As the roar of the motor died we heard for the first time that sound peculiar to the north, a bedlam of howling dogs.  The term “howling dog” suggests back yards.  This was the cry of a wild animal.  And yet it was essentially the cry of resentment against the intruder–a strange bird which, roaring down the river, had broken the silence of their white night. (pp. 85-86) 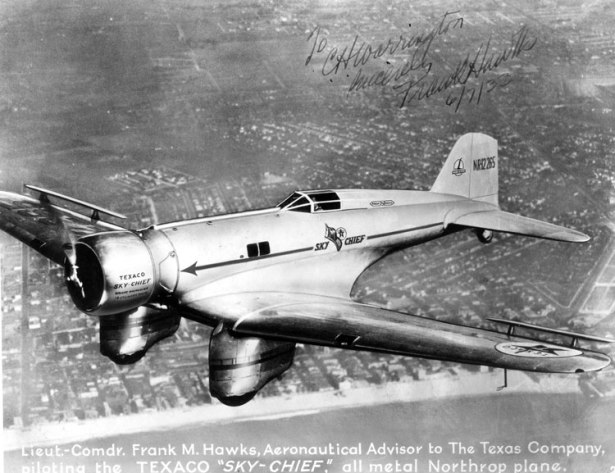 Frank Hawks was known as the “fastest pilot in the world” for the numerous speed records he broke in the 1920’s and 1930’s. On 2 June 1933–five days before he signed this photograph–he set the transcontinental speed record in the Sky Chief flying from Los Angeles to Floyd Bennett Field in New York (13 h 26 m 15 sec.) It was the last plane he flew for Texaco. Metal planes were coming in to their own in the 1930’s, and of course would prove crucial for all of the warring states in World War II. The moniker “Sky-Chief” was applied to Texaco’s premium petrol for automobiles.

Hawks was also the co-designer of the Hawks HM-1 (also known as the Hawks-Gee Bee, shown at right), NX-2491. Exclusively a racing plane (shown here at an air show) it was originally built by the Granville Brothers, who built the Gee Bees. It was sponsored by Gruen Watch for their “Time Flies” promotion. On 13 April 1937, Hawks flew the craft from Hartford, CT, to Miami, FL in 4 h 55 m, and then back north to Newark in 4 h 21 m. On landing at Newark, he bounced three times on landing and broke a wooden spar in the right wing along with other damage. The plane was returned to co-designer Miller, who rebuilt it as the “Miller HM-1” (the photo shows the plane after the rebuild.) The Gee-Bees were very fast planes, but could also be death traps if something went wrong.

Hawks illustrated the dangers of flight in a very personal way on 23 August 1938, when he died when his Gwinn Aircar “safety” aircraft crashed in East Aurora, NY.

Monocoupe 110, NC12370. This was a favourite competition plane, as the Langley Day results show. 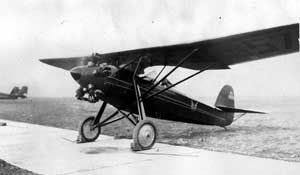 Davis D-1, NC-857N. Note that the photo was taken with the wheels behind the chocks and the engine running. Chet was a dealer for these planes.