The last act of the Warrington yachting drama took place in different waters. Below is the new theatre of operations, South Florida and the northern Bahamas, where the fourth and fifth generations cruised in the 1960’s.

Chet had paved the way in all of these places, first with the Florida Year-Round Club air races to Miami in 1933, then the SPA fly-in to Nassau in 1939, finally in floating craft with the Courier in 1948, and at last to drop anchor in Palm Beach in 1957. But we added more drama of our own to the saga.

To cruise the Bahamas in the 1960’s was a joy, as many of the “Out Islands” (now called the “Family Islands”) were undeveloped and unspoilt. It’s an experience that has certainly impacted my life, as you can see here.

Below: our first boat, the Pem-Don I, a 36′ Chris Craft, docked at Bimini in 1963. My father opted for the same naming convention his dad used for his airplanes. Since we were living in Chattanooga, TN at the time, it had TN registration. It cruised both the Tennessee River and and the waters of Florida and the Bahamas.

The Pem-Don I from the stern. A good view up the marinas of Bimini in the early 1960’s.

Bimini is the closest Bahama island to the U.S., and it’s good we chose it to start, as packing four people into a 36′ yacht (?) wasn’t fun then and now. Note the two flags flying from the bridge: the Bahamian colonial flag and our family burgee. This was also the last yacht to run on petrol; from here on out (except for the dingys and lighters) we cruised on diesel. The fuel economy is better, and it’s much safer to handle, especially considering the yachtsman’s propensity to fuel his boat with a cigarette hanging out of his mouth.

Our second yacht, a classic. 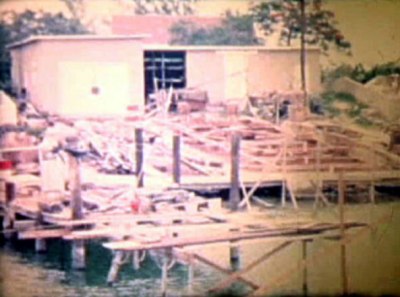 The “shipyard” at Spanish Wells where the Pem-Don I obtained temporary repairs after its near disaster. Barely large enough for the craft, almost as much damage was done getting it in and out of this facility as was made by the reef. 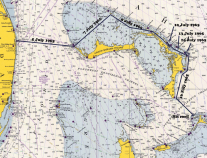 The fateful 1965 cruise of the Pem-Don I, from the time it left the Port of Palm Beach until it hit the reef.

Our cat Buff, a faithful companion on the water, acting as a welcoming committee of one for our second yacht. Domestic cats have a reputation for hating the water, but as long as he didn’t actually end up in it (and the seas weren’t too rough) Buff loved a good cruise. As long as his final destination wasn’t the vet, travel was definitely his “bag,” as they said in that day.

Cruising the Little Bahama Bank between West End and the Abacos, the summer before. Not a visually appealing boat, and dreadfully slow (it cruised at 10 knots,) it was a good in the high seas, which was about to be tested here.

The Pem-Don I at Hope Town. 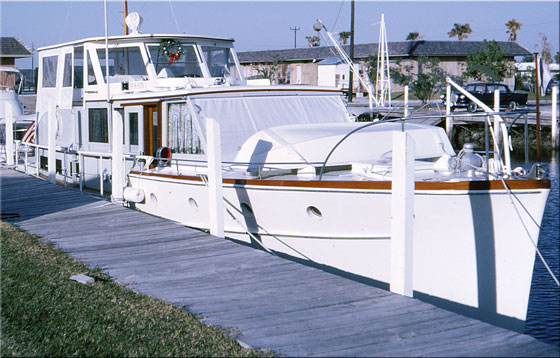 The Pem-Don II decked out for Christmas at Ocean Reef on Key Largo in 1965.

Some specifications for it are as follows:

The Pem-Don I nearly went to the bottom off of Eleuthera.  After that near disaster, we felt it wise to have our boat checked out “stateside” to make sure everything was all right under the water line. This video shows the boat at drydock at Rybovich and Sons Boat Works in West Palm Beach, Florida, along with its relaunching.  Note the Chicago Yacht Club burgee flying even in a situation like this. 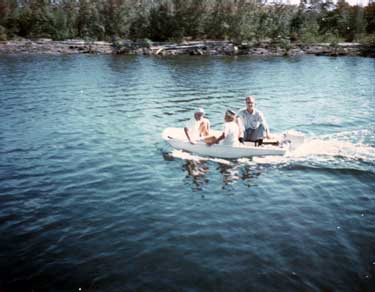 Slightly overloaded: on our last yacht, we had two dinghys. The smaller of the two is shown at the left. Called a “Dilly Boat,” it was an 8′ long, cathedral hull fibreglass boat, not really suitable for all of the three people occupying it in this photo, taken at the Ocean Reef Resort on Key Largo. One of the things that has changed dramatically since our years on the water is the engine horsepower that propel ships of all sizes in the water. For me, it’s still hard to believe the power that’s put into boats now, large and small, and the speeds they routinely achieve. However, this craft took slow to a new level. The outboard motor driving this small craft was only a 3 hp Johnson with a self-contained fuel tank. 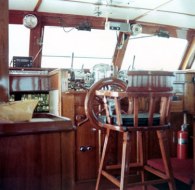 The bridge of the Goldengirl, in actual use.

Our last yacht leaving the Palm Beach Inlet, with Singer Island in the background. My father changed the naming convention for this one. 65′ long, attractive and comfortable, it nevertheless wasn’t the best craft for a storm, as we found out the hard way. Note that the sea just in front of the beach is a different (brown) colour from what our craft is going through. This is because Lake Worth was badly polluted at that time; when the tide went out, the foul water went with it. The line between the lake effluent and the ocean was usually very crisp, as one can see above. (Photo by Bernice Ransom Studios, Palm Beach.)

A fine crew: the larger the yacht, the larger the crew; our last one usually required two. Elmer “Bud” Curless (left) and Captain James North pose in their dress uniforms. True to form, we had khaki ones for normal duty. It’s fair to say that many people who go into yachting do so to create their own “navy” (or in our case our own coast guard.) Such a pose gives an HMS Pinafore aspect to the whole thing, with one notable exception: both the crew and their employer were not shy about using a “big, big D.” (Photo by Bernice Ransom Studios)

Well equipped with the amenities, it had a terrible roll in the high seas, which made cruising through the storm a miserable experience, a prelude to another near disaster at sea.  It wasn’t until years later until I found out why the Pem-Don II snapped back during a roll and the Goldengirl just rolled.

In 1969 the Goldengirl was sold, and the yachting era of our family was at an end.