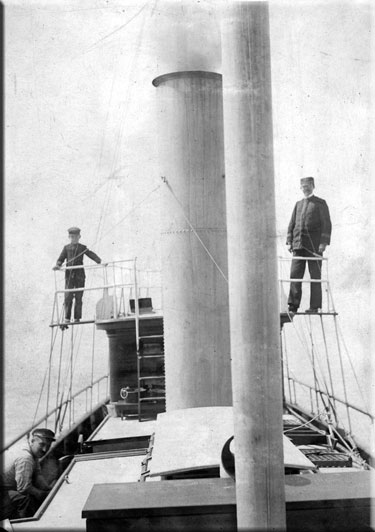 It would be a mistake to look at the yachting activities of the Warrington family as “bookends” of Chet’s aeronautical exploits. In some ways, Chet’s taking to the sky was atypical in a family where marine pursuits dominated for both fun and profit. Chet himself, after the most active days of his aeronautical exploits were done, reverted to yachting on Lake Michigan.

A good deal of that profit came from the family business, Vulcan Iron Works. Based in Chicago, Vulcan began to produce pile driving equipment towards the end of the nineteenth century in a city better known for other forms of deep foundations, especially caissons. But the Warrington brothers James, William and George who bought the company from the people their father sold it to and incorporated it in 1881 were more oriented outwards–towards Lake Michigan and the waterways of the world–rather than simply upwards as was the case with those who built Chicago’s skyline. Two of them–George and James–were naval designers.

This part of chet-aero.com takes a look at five generations of Warringtons, the yachts they owned and where they cruised them. It will also touch on the environment they boated in and how that activity actually enhanced their careers.

Take a look at the following:

Sources for This Section

As was the case for the rest of this site, the main source for it was the family collection of photographs and newspaper clippings. The problem with using these was that many of these had no notes, captions or context. This forced me to do a great deal of research into Chicago history and the history of yachting on the Great Lakes. Fortunately in both cases copyright has expired on most of George Warrington’s lifetime, which made available many documents on Google Books. I used Wikipedia some for this project but at this point (2011) it doesn’t even begin to touch on the subjects of this part of the website. Great Lakes yachting in the 1890’s is, in many ways, as interesting of a subject in its own right as aviation in the 1930’s, but the interest isn’t there and thus the web effort to document it isn’t there either. 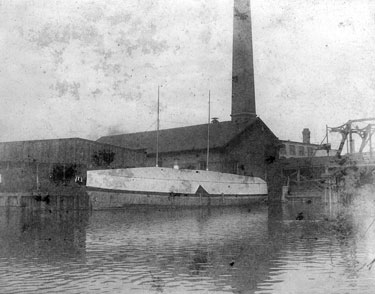 Winter storage for one of George Warrington’s yachts. It’s a necessary part of boating in a climate subject to wide swings in temperature and precipitation type. Like the yacht, much of the material on this site has been in “winter” storage for a century or more, waiting to sail the virtual sea that is the Internet.

That having been said, some of the sources are as follows:

Most of the newspaper clippings came from the Chicago Times-Herald. Unfortunately many had lost the dates. In preparation for the Chicago Yacht Club’s Diamond Jubilee, my grandfather evidently attempted to organise his father’s materials into a coherent scrapbook. Although he ultimately didn’t have enough, what he did was very helpful.