The field, caddies and gallery behind them, wait to proceed. In the upper left hand corner, barely visible above the palm trees, is the spire of Bethesda-by-the-Sea Episcopal Church.

A major part of the season in Palm Beach is the system of charity balls. A socialite can make–or break–his or her reputation on how well or poorly a charity ball is hosted. On the other side, drawing up the lists of invitees is an exercise in diplomacy. For those who are invited, making “the grand entrance” properly is likewise an important exercise.Along the same lines–although not quite as rigid in protocol–are charity golf tournaments. One such was the Palm Beach Golf Classic; we show a few shots from the 1974 Classic, played in March of that year at the Breakers in Palm Beach. Leading the field were four well known professionals: Jack Nicklaus, Sam Snead, Ben Crenshaw and Dave Marr. We show some shots of them below. 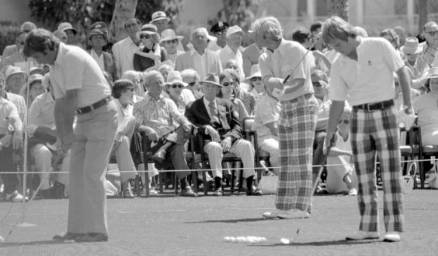 Sam Snead, waiting to putt. Raised in Virginia mountain poverty (which explains his reputation for thrift,) “Slammin’ Sam’s” swing was one of the smoothest ever in professional golf, and watching him play was a joy. 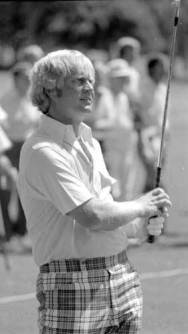 Jack Nicklaus admiring (?) his iron shot. Jack learned what every member at the Breakers knew all too well: the Breakers wasn’t a long course, but the narrow fairways demand accuracy. It’s an easy matter to find yourself two fairways over after a drive.

Snead conferring with an official. 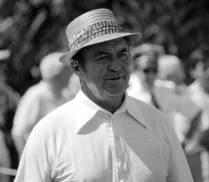 A close-up of Sam Snead with his signature straw hat.

Bill Arnold, the Breakers’ club professional during the late 1960’s and early 1970’s. As with a charity ball, hosting a golf tournament was a great deal of work; Bill was busy and on the move keeping the tournament running properly.

In the drink: the photo sequence of Paul “P.B.” Dye, son of golf course designer Pete Dye, inserted in the 1973 Tartan, the yearbook of the St. Andrew’s School in Boca Raton, Florida. P.B., of course, is continuing the golf course design work of his father (which includes the Delray Dunes course shown above.) Going into a water hole on a Pete or P.B. Dye course will never be the same after this…

Swing analysis, 1970’s style. This sequence of photos was taken using a special Polaroid® camera which was set up both to take a series of photos in rapid sequence and to record them on one piece of Polaroid® “film.” The analysing professional was then able to, within a few seconds, develop the photos and use them to improve (hopefully) the golfer’s swing.High speed sequential photography has been with us since the end of the nineteenth century, but with digital technology, it’s just too easy…too bad a good golf swing isn’t!