Chester Henry Warrington was born in Chicago on 22 February 1890, the only child of George and Minnie Chester Warrington.

Chet (at right) the college man, at Lehigh. He graduated in 1912, doubtless with a “Gentlemen’s C,” which he exemplified. But his achievements showed that academic prowess isn’t the “end-all” in life. 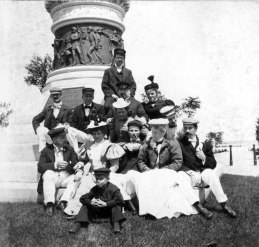 Well, most of us are having a good time: George Warrington (top) and friends stop for a group photo at the Civil War monument to the Union at Washington Park in Michigan City, Indiana. Michigan City was and is a convenient holiday destination from Chicago. Since many in the party are in their boating uniforms, I suspect they arrived by one or more of their yachts. The monument was donated to the city in 1893, so it was fairly new when this photo was taken. At the very bottom was Chester, who wasn’t quite as enthusiastic about the adventure as the rest of the party. In an era when the idea was for children to be seen and not heard, Chet broke the mould and had quite an attitude, one which was indulged by his mother, who is sitting behind him. Chet, a kid with an attitude, one he would carry with him his whole life.

Chester at his mother’s relatives’ home in the Champaign area. He’s holding a hammer in his hand; he was always handy with tools and kept a workshop all of his life, but at this age wielding such an instrument generally meant trouble.

When Chet was born, the Warrington family had nearly a half century of success in the U.S.. Chet’s grandfather, Henry Warrington, had come to the U.S. from England in 1842. Ten years later, he started the Vulcan Foundry, which ultimately became the Vulcan Iron Works. In 1881 his sons George, William H. and James N. Warrington purchased the company back and incorporated it; six years later they produced the pile hammers that made the company legendary.

George Warrington was additionally a success in his own right, with his Warrington Iron Works. He was a naval architect who designed and built steam yachts which graced Lakes Michigan and Geneva. This talent led to the event that changed the family’s fortunes and Chet’s more than anyone else’s: President Theodore Roosevelt appointment in 1903 of George Warrington as engineer commissioner for the Bureau of Lighthouses and Lightships. This required George and the family to move to Washington, DC.

Chet attended the University School and then the Lewis School in Chicago until 1905. He entered the Army and Navy Preparatory Academy, and from there went to the Tome School in Port Deposit, MD, from which he graduated in 1908. After two years at the University of Illinois (where his father had attended,) he transferred to Lehigh University, where he graduated in 1912 with a B.S. in Civil Engineering. He was a member of the Beta Theta Pi fraternity.

Chet was never one to let the grass grow under his feet; he returned to Washington to start the Warrington Motor Car Company, which became the Cord-Auburn dealership (and eventually Dusenberg) in Washington. In 1921-22 he was Board Chairman of the Washington Area New Auto Dealers Association. Not content to be just a dealer, in 1922 he and his father were granted a patent on “Timing Devices for Hydrocarbon Engines” (U.S. Patent 1,418,996.) In the midst of all this he married Myrtle Daspit of New Orleans in 1916; his first child Dorothy was born two years later.

Such a person was not content to be earthbound. His natural energy, combined with his experience in World War I, led him to flight. After Orville and Wilbur Wright’s successful first flight in 1903, aeronautics has developed rapidly, especially with the stimulus of the “Great War” of 1914-8. The years between the world wars saw continued development of a technology whose potential was just beginning to be realised. It was also a technology whose regulation was still very much in an undeveloped state. It was an exciting time to fly, and Chet wasn’t about to miss it.