Chet left Washington in 1940 and returned to Chicago to direct the Vulcan Iron Works. Characteristically, he did not return to his native city without making a splash, this time in the field his father had pioneered: yachting. He owned several yachts, organised many cruises, and in 1950 was Commodore of the Chicago Yacht Club. 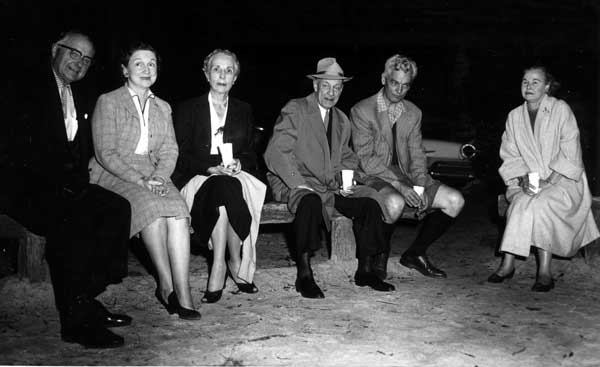 In 1955 he retired as President of Vulcan, handing the operation to his son Henry. In 1957 he retired to Palm Beach, fulfilling a trend that started with his involvement in the Florida Year-Round Clubs and the air cruises there. But emphysema was taking its toll, and he “flew west” 12 November 1961.

From Rebel to Autocrat…and Back Again

To my mother and father,
The best friends a boy has,
I present this with thanks
For the many advantages
They have given their son.
My father thought me shiftless
And frivolous and always thinking of a good time,
But now dear Dad I have made good.
My mother, God bless her,
Always loved me and knew me as a mother knows her child,
May I never prove unworthy of your love and kindness.
May God bless you both, and in old age look over this book and think how your son appreciated what you did for him.

Chet wrote this sentimental piece in the front of his 1908 prep school yearbook. Chet’s characterisation of his previous conduct wasn’t just post-Victorian schmaltz; as we noted in the beginning, for secondary school he had first attended the Army and Navy Preparatory School before the Tome School. Chet’s father wanted him to go to Annapolis and be a naval officer, but Chet went AWOL from Army and Navy Prep, ending this ambition. Chet’s regard for this parents’ authority was sometimes little better than for the NAA during the 1933 Langley Day dispute.

My father predicted that the “Baby Boomer” generation would turn out to be the most autocratic of them all. Today we aggressively use our technology and legal system to micromanage our youth in ways parents of the past could have only dreamed, attempting to beat them into a “zero-tolerance” environment in all kinds of ways. George Barna, the Christian pollster, tells us that boomer’s greatest need is control. My father’s prediction was based on experience: Chet, an instinctive rebel, became an authoritarian master of the family and business, and his authority in some ways reached beyond the grave. In turn those who experienced authority tend to become indulgent. To understand the “Greatest Generation” we must understand the generation that came before them.

A portent of things to come: a German glider at the College Park Airport.  Below is a video of its flight.

In his classic work The Rites of Spring, Modris Eksteins observes that one of the characteristics of modernity is a fascination with technology. Certainly that pervades our story; Chet was certainly enamoured with the technology of flight, along with all of the other technologies he came in contact with. In that respect his story is a modern one; the constant recollection of “the good old days” needs to be tempered with the fact that many of the actual participants in those days held attitudes towards life that are in many ways more “modern” and secularistic than our own. Part of that modernity for Chet was an abiding faith in progress, a faith tied to his conservative business and economic philosophy. That kind of faith was not accompanied by the faith we frequently associate with “conservative” people. Looking back, it makes sense to trace how these two interact, and why modernity hasn’t ended up as the universally accepted secular nirvana its proponents have always promised.

A movie of its flight, and its “Keystone Cops” aftermath.

Part of the problem stemmed from that paragon of modernity itself, Germany. It was here where “modernity” as we understand it first became the philosophy of an entire society in the years leading up to World War I; indeed, the enthusiasm generated by those heady days fuelled Germany’s aggressive prewar stance and led to the war itself. Its defeat was not educational; Adolf Hitler simply used a more “populist” form of modernity to propel the rise of the National Socialists and the return of Germany as a world power, albeit unwelcome after 1 September 1939.

Germany’s place in modernity was better understood during the 1930’s and earlier than now. For some of those involved in aviation, an obvious centre of modernity, the temptation of admiration for Germany in the 1930’s was too much. This touched some of the participants in this story. Charles Lindbergh’s isolationism and pro-German sentiments were well known; Laura Ingalls went to prison for a time as a German spy during World War II. Although Chet was spared this because of his basic patriotism, the German influence on many during this period is too great to ignore. It is easier to see the horrors of Nazism in hindsight than through the lens of the 1930’s. There is a sober lesson: just because something is popular, successful and outwardly attractive, it doesn’t make it right.

This leads us to another aspect of our story: it is to some extent an elitist tale, although Chet wouldn’t have seen it this way. A good number of the competitive pilots–and certainly most of the sportsman ones–came from well to do backgrounds. These people were more open than most to the new currents of the times. This is best illustrated by the growing prominence of women in aviation; it was easier for women to get away from the “industrial” model of women’s roles when that industrial model didn’t apply.

All of this was changed by World War II. The war trained a generation to be bonded to their government and have a higher respect of authority than any other in American history; the Cold War only reinforced that. The post-war prosperity levelled the distribution of income from the 1950’s to the 1970’s more than before or since. The experimentation of the elites went out of fashion, gravely so in some cases (just ask Alger Hiss.) Many of those coming up in the vast upward social mobility lacked the modernity of the other elites, even though they proved successful in making their way in American society.

The aircraft industry itself underwent vast changes after World War II. Many of the manufacturers mentioned here either disappeared (WACO, Howard) or were merged into others (Stinson,) busted by the glut of war surplus planes. The training of military pilots during the war broadened aviation, but that broadening accelerated the push for more regulation, a push that became a hard kick 11 September 2001. Aviation was and is still fun, but the sense of adventure that it had when Chet graced the skies is not what it used to be.

As for the rest of the country, although the post-war conservatism and penchant for conformity was comforting to those who had gone through both depression and war, it bottled up the forces of modernity still at work. These finally exploded in the 1960’s, an event whose aftermath has dominated American life and politics ever since. With the inequities wrought by America’s progressive deindustrialisation in the 1980’s, the elites, many schooled in the radicalism of the 1960’s began to feel like the country was their birthright. Things have not worked out for them, though; it is hard for them to understand why. One reason is that the vanguard of modernity has passed from “movers and shakers” like Chet to bureaucrats and academics, and a “get things done” culture such as ours has historically found that instinctively unacceptable.

All of this leads one to realise that modernity is inherently unstable. In the hands of people such as Chet who were a product of a tradition of respect for values that predated its rise, the backwash could be controlled. But when placed in the hands of tyrants–either those like Hitler and Mussolini who “made the trains run on time,” or the petty tyrants of today who are obsessed with process, modernity–and the post-modernity that comes after it–can be a frightful business, and the world instinctively yearns for something better.

Chet in his Stinson.

But such hindsight should not blind us to the accomplishments of Chet and others, who took to the skies in a young technology, organised things to both make it accessible to others and advanced the technology itself. In the Bible, after the author of the Book of Hebrews went through the “roll call of faith,” he went on to make the following statement: “Yet, though they all won renown by their faith, they did not obtain the final fulfilment of God’s promise; since God had in view some better thing for us, that they, apart from us, should not attain perfection.” (Hebrews 11:39-40, Positive Infinity New Testament) Today we have, in aviation and elsewhere, opportunities to advance technology and to obtain economic, social and recreational benefits from it. In doing so, we need to be mindful of those that have gone before us, that we stand on their shoulders and without them we would not be where we are, and in turn we validate the previous work through its continuing advancement. As was the case with Chet and his contemporaries, we should once again take off and soar anew into an age of adventure.