The WACO aircraft were manufactured by the Weaver Aircraft Company (later called the Advance Aircraft Company) of Troy, OH. The company produced some of the best-loved aircraft of the era; the cabin biplanes (such as Chet’s) were a good combination of performance and comfort, making them suitable for sportsman pilots or business people, or in Chet’s case both.

Chet took delivery of the plane in May 1936 from Waco Sales of New York in Mineola. Having been one of the founders of the Sportsman Pilot Association, he flew it on many of his SPA cruises. The ZQC-6 was powered with a Jacobs L-5, 285 HP engine.  Both the wing and the tail used a Clark Y airfoil profile. The plane was otherwise equipped as follows:

It is interesting to note that, although Chet knew he “had the stuff” for the Waco, the Waco needed some help to keep up with Chet. Some of his needed repairs were as follows:

As with all of his planes, Chet eventually cast about for new adventure. In June 1939 he placed the plane for sale at Wings Field in Ambler, PA. His original plan was to replace NC-16227 with another Waco, but he ended up buying a Howard DGA-15 in November 1939. 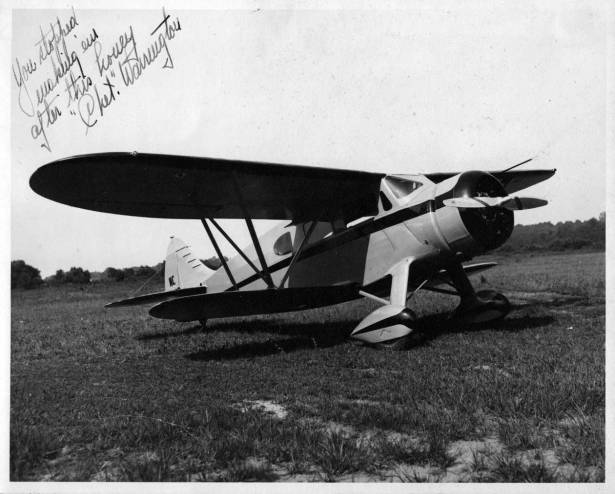 Chet signed this photo of his WACO ZQC-6. He loved this plane but evidently they’re subsequent designs didn’t suit him; his next one was a Howard DGH-15.

The Waco itself was finally sold in June 1940. After a couple of owners in Pennsylvania, it went west (literally) to a chopping service in Wyoming. It eventually found its way back to Chet’s original “stomping ground” in the Washington area.

Unfortunately, as Chet learned more than once, airplanes are prone to land unexpectedly, as the following account reminds us of:

On July 24, 2005, about 1630 eastern daylight time, a WACO AQC-6, was substantially damaged while landing at the St. Mary’s Airport, Leonardtown, Maryland. The certificated commercial pilot and passenger were not injured. Visual meteorological conditions prevailed and no flight plan had been filed for the local flight conducted under 14 CFR Part 91.

Examination of the airplane by a Federal Aviation Administration inspector did not reveal any mechanical malfunctions. Nor did the pilot report any.

The pilot reported 4,246 hours of total flight experience, which included 33 hours in the same make and model as the accident airplane.

This account, information on the aircraft’s history, and the 2003 photo come from Andy Heins, president of the National Waco Club, to whom we are deeply grateful.