In 1903, President Theodore Roosevelt appointed George as Chief of the Division of Marine Engineering, U. S. Bureau of Lighthouses, Department of Commerce, a post which he held through President William Howard Taft’s administration and into the first half of Woodrow Wilson’s administration. 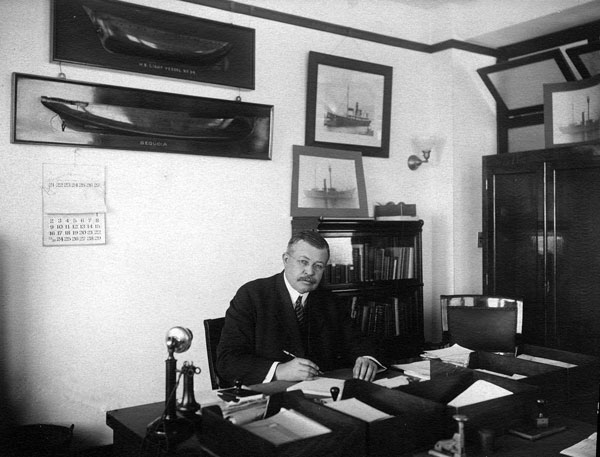 George Warrington in his office in Washington.

The 11-12 December 1913 Transactions of the Society of Naval Architects and Marine Engineers noted the following about one of George Warrington’s designs, in this case a lightship:

U. S. Lightvessel No. 94, Plate 53…(shown below) may be taken as an illustration of the degree to which this type of craft has been developed. It was completed and placed upon station at the Frying Pan Shoal, N. C., in 1911, and still remains the latest and most highly developed addition to the fleet, although new vessels are now under construction which will be equipped throughout with internal combustion main and auxiliary engines.

The vessel was designed under the direction of Mr. George Warrington, Chief of the Division of Marine Engineering, U. S. Bureau of Lighthouses, and possesses the following general dimensions and characteristics:-

Lightship Frying Pan on station off of North Carolina. If you look very carefully at the photo above, you can see this same photo directly above George Warrington’s head.

As a naval architect and yachtsman, George Warrington took an interest in all floating craft, including those of the U.S. Navy. Here are a couple of photographs from his collection, taken before his stint with the Bureau of Lighthouses and Lightships.

In his last years in the Washington area, George Warrington still found time–and the means–to pursue yachting in new waters, namely the Potomac River and the Chesapeake Bay. The Courier was the family’s last steam yacht.

According to the 1922 List of Merchant Vessels of the United States, issued by the Department of Commerce (where George Warrington had worked,) the Courier’s specifications were as follows:

Time for repair and inspection: yachts are frequently described as wooden/steel/fibreglass holes in the water into which money is poured, and a great deal of that is at the shipyard. Here James N. Warrington takes a look at the Courier while it is in drydock at the Forrest and Dunn shipyard in Norfolk, VA, in August 1925.

Obviously the Courier was a restful experience for everyone, including the crew.

Time for repair and inspection: yachts are frequently described as wooden/steel/fibreglass holes in the water into which money is poured, and a great deal of that is at the shipyard. Here George Warrington takes a look at the Courier while it is in drydock at the Forrest and Dunn shipyard in Norfolk, VA, in August 1925. It’s entirely possible that this was the last time the two brothers saw each other; James lived in Los Angeles, CA and George died the following Christmas Eve. After his death the Courier was sold and the era of Warrington steam yachts was at an end. 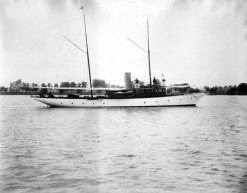 The Courier was the family’s last steam yacht.

One of the nine crew members of the ship, Johannes Tieglund, the boatswain, in his dress uniform.

Mr. Warrington was president of the Warrington Iron Works at Chicago.  he design and built numerous steam yachts such as the Pathfinder, Thistle, Idler, Buena, Arline, Bald Eagle, besides various others at Geneva Lake, Wis.  He owned the yacht Courier.  He was the inventor of the Warrington water tube boiler and of many other marine auxiliaries.  From 1903 until 1915 he was commissioner of lighthouses in the Dept. of Commerce at Washington.