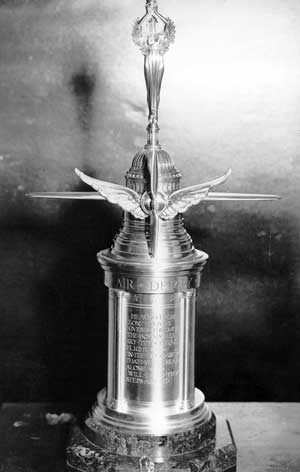 One of Chet’s challenges in putting the Washington Air Derby together was to raise money for the trophies. A sample of these is shown above.  Today this trophy is on display at the College Park Aviation Museum.

With the popularity of air shows, it made sense that the nation’s capital should have a major air derby. Chet thought so too; he was one of the main proponents of the 1932 Washington Air Derby, and followed up by being its chief organiser.

It’s not clear when Chet actually started working on the idea, but by late spring 1932 he was already raising funds for the event at local groups such as the Rotary Club and his fellow auto dealers. The Washington Air Derby Committee elected Chet its chairman on 17 June 1932; Eddie Rickenbacker, the World War I ace, was the chairman of the Contest Committee. He was also coordinating the event with the National Air Race in Cleveland, OH; its chief, Cliff Henderson, visited with the Air Derby Committee at Washington-Hoover on 6 July. By that time preparations were well under way. Chet reciprocated a few days later by staying with C.R. Thompson (donor of the famous Thompson Trophy at the National Air Race) at his home in Painesville, OH. Chet did other out-of-town promotional visits in early August.The event itself began with the N.A.A. Convention 18-19 August; the Derby itself, held at Washington-Hoover, ran from 18-21 August 1932; Jimmy Doolittle (later to lead the first bombing raid on Tokyo during World War II) was one of the competitors.  You can  click here for the entire program.

At the end of the show, the Cord Cup competition began. On 21 August, one set of planes and pilots began from Washington-Hoover, with another starting at the same time from Los Angeles. Both groups met in Dallas, TX, and from there flew to Cleveland where they were to land before 1700 27 August 1932. NBC broadcast the entire event on radio.

Chet for his part flew to Pittsburgh on the last day with Earl Steinhauer; there they met with aviation columnist Bob Ball, and together flew to Cleveland to see the end of the Cord Cup competition and the National Air Race.

After the many still photos one sees of this event, a movie–even a jerky one like Chet took–gives a much greater appreciation for an event like this. We’d like to note three items:

Mrs. C.H. Thompson, whose husband initiated the Thompson Trophy, sits in a car with her home in Painesville, OH, in the background. She also appears in the movie.

The Washington event was a success, and the Association turned to its next major event–Langley Day.

In August 1933 the Association created the Collier Trophy, which was to be awarded “for improvement of airplanes or aviation engines, for betterment of flying conditions, for improvement of methods of instruction or handing of traffic at airports, for the saving of life or perhaps for flying a maximum number of hours without damage to life and property.” It also at one point proposed an air defence league, which would provide for transportation and other needs in the event of an emergency.

Another interesting event sponsored by the Association was “Aerial Golf.” This involved flying to various fields and playing holes set up at those fields. One of these took place 24 June 1934, which involved a “golf course” including College Park, Washington-Hoover, Hybla Valley, Beacon, Congressional and Intermediate 57-B (Bowie, MD) Airports. Such an event is shown above.

Chet was a member of the W.A.D.A. until shortly before his death.