Private clubs have been a part of Warrington family life from at least the 1880’s onwards. Some of these are represented in this page on the Palm Beach Golf Classic. But if one club deserves pride of place relative to the family’s involvement in it, it’s the Chicago Yacht Club. The burgee of the club (both of them, actually) flew on family owned craft from the 1890’s to the 1960’s.

The “new” Chicago Yacht Club burgee, on the left. Originally the Lincoln Park Club burgee, the CYC adopted it when the two clubs merged. On the right was the Warrington yachting burgee, which few on all of the family’s yachts the entire time they were on the water. The crossed burgee “logo” was another thing that Chet liked to emblazon on just about everything he owned. 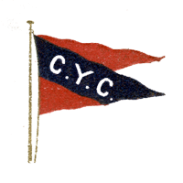 The Club was founded in 1875 and incorporated in 1882, about two weeks after the Warrington brothers incorporated the Vulcan Iron Works. Its early years were promising but by the mid-1890’s the Club found itself becalmed, most of the action taking place at the Lincoln Park Yacht Club, where George Warrington was Commodore in 1897. The arrival of the likes of Fred Morgan with his Pathfinder (Commodore 1897-1899) reinvigourated the Club and prepared the way for George Warrington’s term as Commodore of the Chicago Yacht Club on its Silver Anniversary in 1900.

A good deal of that preparation involved the inauguration of two events. One was the Mackinac Race, which has become the Club’s signature event. The longest freshwater yacht race in the world, it involves sailing from Chicago to Mackinac Island. First run in 1898, it would not become a regular event until 1906 with the purchase of the trophy.

But the event that took the most attention during George Warrington’s heyday in Chicago was the Canada’s Cup. Billed as the freshwater equivalent of America’s Cup, its basis was the simple fact that the Great Lakes were not only an American geographical feature but also an international one that divided/joined the U.S. and Canada. The start of the event was actually at the Lincoln Park Club, where 1896 Commodore E.C. Berriman challenged the Royal Canadian Yacht Club in Toronto to an international race. The challenge was accepted and Berriman built the sloop Vencedor for the event. Held in Toledo, OH, the Vencedor fell to the Fife cutter Canada in a best of three series. (The Vencedor went on greater things, winning the Mackinac Race twice, in 1904 and 1907, but it also became the only vessel ever lost in the Mackinac Race on 23 July 1911.)

Not to allow the honour of city or country to fall by the wayside, the Chicago Yacht Club, under Commodore Morgan, issued a challenge in 1898. As is the case with the America’s Cup, the race would have to be in the Canadians’ home waters, Toronto. The rules of the race can be found here. The CYC entered the Genesee, while their Canadian counterparts entered the Beaver. (One interesting requirement is that the “…crews shall be limited to six men, whose total weight shall not exceed 1,050 pounds”, or an average of 175 pounds per man.)

One side benefit to the challenge was that George Warrington and other officials of the Club got to attend a ball at the Royal Canadian Yacht Club on 15 December 1898, attended by the Earl of Minto (Governor General of Canada at the time) and the Countess Minto.

The race was run in August 1899. The first day of racing, 21 August, was a disaster. According to the 22 August 1899 issue of the Chicago Times-Herald:

To begin with an accident at the outset put Beaver out of the race and then Genesee, instead of taking the course and following the judges’ boat, trailed along after the steam yacht Pathfinder of Chicago until a buoy was reached, which was mistaken for the end of the first leg. Starting off from that it set out on a course to the eastward in an attempt to find the second buoy, which was to be rounded for the run home. In vain it looked for, and after fooling around on Lake Ontario for several hours Genesee turned home, thinking it had completed the course.

Consequently the question being asked tonight is, What was the Pathfinder doing at the buoy? Did its compass mark the course which the judges laid out? The latter is answerable by the fact that if the judges had a compass which was incorrect how did the judges find the original buoy and wait for over three hours for the yachts?

Skipper Davis of Genesee when seen tonight said: “I was following the yachts Pathfinder, Siren and Canada, thinking they had the correct course, and we plainly made out the stake long before we came to it We rounded it, but could not see the judges’ boat anywhere, and so, believing that the yachts ahead of us had the correct course, I followed along and started for the second buoy, but failed to find it…

Should have used the Thistle…in any case the judges declared no race for that day. (Click here for another view of the Pathfinder’s uninspiring performance.)

The Genesee went on to win the next two matches (the last one by 31 seconds on a 5:06:30 course) and returned the cup to American soil. The members of the Chicago Yacht Club stretched out the celebration: on 22 November they gave a dinner to Commodore Morgan (even after the Pathfinder’s uninspiring performance in Toronto) at the Chicago Athletic Club. One week later the Canada Cup Dinner Committee (with George Warrington’s help) sponsored a smoker for “…fostering good fellowship among its members and bringing the yachting spirit to a proper pitch to insure an active and agressive campaign for yachting during the coming season.” The Genesee’s victory also inspired verse:

Oh! Genesee, sweet Genesee,
At windward work you are a peach,
You are a dandy on the run,
And just a daisy on the reach,
Genesee.

Oh! Genesee, sweet Genesee,
With Skipper Davis at your stick,
You sailed a race for history,
And made the Beaver boys feel sick,
Genesee.

Oh Genesee, sweet Genesee,
The Yachts may come, the Yachts may go,
But still the race will be with you,
A little bird has told me so,
Genesee.

The Canada’s Cup victory was an excellent way to begin George Warrington’s term as Commodore in 1900. He was able to secure support for a new clubhouse, built on pilings (doubtless driven by the Vulcan hammers made a few blocks over on Clinton St.) A view of that, along with the first floor layout, is to the right. His name is also associated with the Warrington Cup, a race for sloops between 30 and 40 feet in length.

There’s no doubt that, by the time George Warrington’s term as Commodore came to an end, he had done his duty to the Club and taken up the “yacht club’s burden.”  This poem, shown below, was, no doubt, intended to be sung to the hymn tune Lancashire, used in hymns such as “Lead On, O King Eternal.”  You can hear and see it performed below, very much like later Warringtons would experience it in Palm Beach.

Unfortunately the Canada’s Cup was lost in 1901 when the Canadians beat the Chicago Yacht Club’s defender in their own waters, an event George Warrington witnessed as a member of the committee.

Returning to Chicago from Washington in 1940, Chet wasted little time getting back into the swing of things and becoming the “mover and shaker” that had started the Washington Air Derby Association and the Sportsman Pilots Association. Having his father’s legacy only made things better. He went back into yachting and made some significant contributions to the Club.

For more photos from Chet’s time at the club, click here.

He instigated the Commodore’s Fleet Review. A photo from the first review on 9 July 1946.

In 1950 he was Commodore of the Chicago Yacht Club. One of his main tasks as Commodore was to reactivate (and promote) the bond-selling program and expedite completion of a new clubhouse on the Chicago Harbor site. The effort worked and the lounge section was opened in June, 1951, and the bonds were paid off by November 1954. Below he makes a speech at the Diamond Jubilee Commemoration and Winners Dinner on 11 June 1950. His ability to organise and speak at gala events paid off again when he did a similar service for Vulcan at its centennial a year and a half later.

He instigated the Commodore’s Fleet Review. A photo from the first review on 9 July 1946. 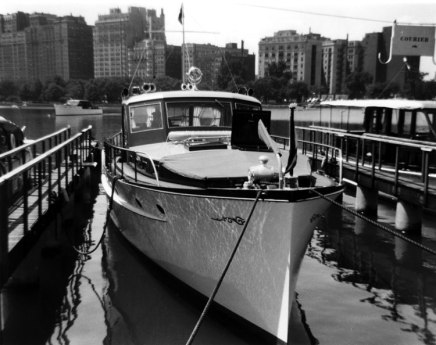 Chet’s yacht Courier at its berth at the Chicago Yacht Club. Although the Courier was suitable for a Commodore of the time, Chet opted to sell the Courier and purchase the Cavalla for his Flagship as Commodore. Note the name for the yacht on the slip; in addition to helping guests to find the craft, it was doubtless a boon to owners who spent a little too much time at the bar… Among the many prominent Chicagoans to dock their boats at the Chicago Yacht Club in Chet’s day was Charles R. Walgreen, Jr., of pharmacy fame.

In 1944 he presented the Commodore George Warrington Trophy (seen at right, in its original form) as a Mackinac Race section tropy. He also, in 1955, established the Chester Warrington Trophy for the annual club power yacht navigational race.